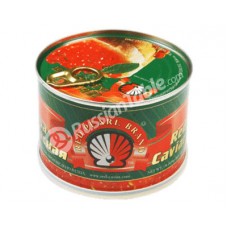 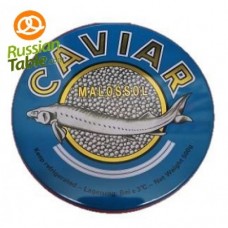 Russian Caviar- hard to afford but worth every cent

Caviar is a very famous delicacy, which is often associated with gourmet cuisine and high price. It consists of the salt-cured roe of a sturgeon, which can be fresh or pasteurized. The pasteurization reduces the culinary and economic value but it’s difficult to keep this product fresh for a longer time. The term caviar originally refers to roe from wild sturgeon from the Caspian and the Black Sea but nowadays it can be used to describe also the roes of other species, such as salmon, steelhead, trout, lumpfish or carp.

The word caviar originates the Turkish khavyar and its origin is dated to the 16th century. This dish was once reserved only for royalty but in America, caviar was often served in saloons as a free plate during lunch because its salty flavor encourages thirst and therefore raises sales. Thanks to the fact that in the 19th century America's waters were full of sturgeons, exporting caviar to Europe became a very popular business and the US quickly became the largest exporter in the world. As a result of this caviar boom in the early 1900s, sturgeon ended up nearly at the point of extinction. This caused a big growth in prices and

Russian caviar became very popular. Nowadays we can find many sources of caviar and also many different types of this delicacy. The two main caviar categories are black and red caviar. This categorization is based on the color of the roe. The rarest and priciest black caviar is from beluga sturgeon, which lives in the Caspian Sea, but there are many other popular types of caviar. Sturgeon caviar eggs are pea-sized and there are glossy and clear. The color can differ from light silver-gray to black and the taste is creamy almost buttery. This caviar is considered the highest premium grade available. Another black caviar is from paddlefish, which is very popular in America and is considered the cheaper version of sturgeon caviar.

Red caviar is made from the roe of salmon, trout or cod and it’s a popular part of Russian and Japanese cuisine. Various species of salmon have always been common in the north of Russia and therefore the red Russian caviar became a very popular delicacy in Russia but also in other parts of the world. These eggs have the medium size and their color can be orange to deep red. This salmon caviar represents the most common substitute for the more expensive and popular sturgeon caviar.

When serving caviar we should remember that it should be always served cold and preferably in a non-metallic bowl filled with ice. Serving caviar in silver or metallic bowl is considered a sin because of the oxidation, which can ruin the taste of caviar. The most traditional way is the usage of a spoon made of mother-of-pearl. Caviar should never be frozen because it can become mushy.

Caviar always was and still is one of the most popular delicacies all over the world and Russian caviar reaches the highest quality. So don't hesitate to treat yourself with this salty and delicious meal.